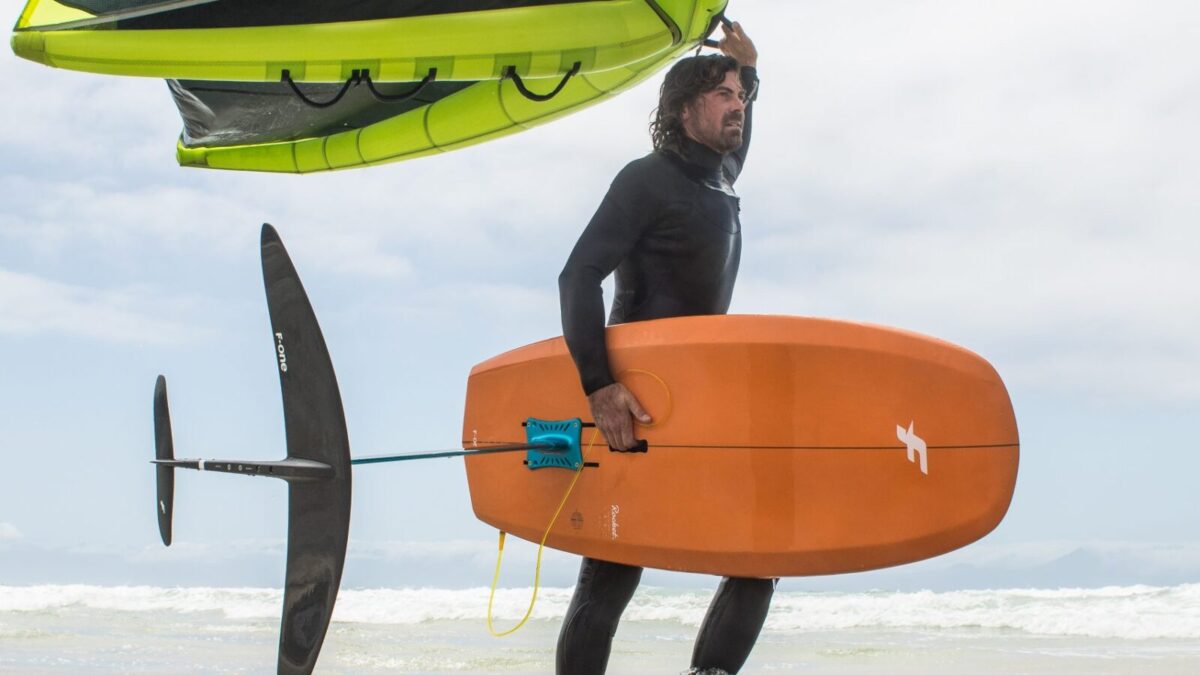 The Inertia tested a F-One Rocket Wing V2 5’10 along a F-One Phantom Carbon 1480 foil with a pack alu mast 75. The Phantom can also receive a full carbon mast.

Here is the full article published by Joe Carberry @ The Inertia.

For surf, you usually want something small-ish but with enough volume to make it easy to pop up. For kiting, you can go smaller, blessed with the power of the wind. Foiling a boat wake? Even smaller as again, the infinite power of the boat negates any need for volume.

For me the perfect foil board is between 5’8″ and 5’11”, 80-100 liters to fit my bulbous six-foot, 190-pound frame. I prefer foiling in the open ocean or river using the power of wind – way away from any lineup – or in mushy, fat waves where no one else surfs. Being that foiling is expensive, most of us can only afford one setup. I recently tested the F-One Rocket V2, a 5’10” foil board designed for wing foiling. It’s 105 liters, stable and thanks to its bamboo construction, extremely light. Here’s the absolute bonus: I was able to prone paddle it in surf and pop up in mushy waves in the random, small beach break of the Oregon coast – not recommended if it gets big but ideal for foiling when tiny (note that the F-One Rocket also comes in a surf-specific option). It has a wide – but not too wide – feel somewhat similar to a Mini Simmons design so it was stable, fast, and easy to paddle.

When using wind, specifically a wing (I also demoed a really fun Swing Wing from F-One), the Rocket V2 was as advertised, so easy to pump and get up on foil that it made everything easier (I would love to try a 5’5″ at 85 liters next). With heavier boards (volume over 120), I’ve had to have winds reach 20 knots to get on foil but this lightweight setup allowed me to have fun in 12-15 knots with a five-meter wing. Easy living.

Which brings us to the foil. I used F-One’s Phantom 1480, a full-carbon setup that was so damn light and easy to use. I found it just as capable in the surf as in the open water. And again, weight is everything in this game and the French minds know what works. Combined with the 75 cm Alu Mast, this equipment was simple to use: F-One’s proprietary quick screw system allows for easily attaching and un-attaching the foil from the board for packing and travel. All this and the Rocket V2 is easy to carve, which is super important in my book, especially when riding downwind (the most fun) and connecting bumps.

I love this setup and could, legit, ride it every day. To paint a full picture, the lightweight does give it a certain fragility – that bamboo board and carbon wing means no matter what anyone tells you, your gear will get beat up, especially in the wind (treat it nice). On one blustery morning, I sat the foil board down near the water’s edge. A windsurfer, who should have known better, sat his sail downwind of my board. The wind picked up my board and sent it ripping through his sail. I felt terrible but he was lovely about it, knowing it was his mistake. The folly left a tiny, barely-noticeable nick in the back of the carbon wing I was able to sand out.

The bamboo board is fairly hardy but it still dings. I cracked the nose ever-so-slightly with a boom from a wing one morning when I wrecked (which happens often) and there was a tiny ding from the aforementioned gust incident, above. Which brings me to another point: foiling is absolutely one of the most fun and versatile water pursuits available today – especially because wind usually means the waves suck for regular surfing. It’s a fantastic tool to round-out your water-bound quiver. But unfortunately, it’s still terribly expensive, which is certainly a bummer given how fun foiling is. The Rocket board is around $1,600, the Phantom foil runs $1,800 with mast and that’s before you buy a wing or a kite.

Foiling, and wing foiling, is going to continue to evolve at light speed. I see it getting cheaper within the next few years as more product comes to market. There are several obvious innovations on the horizon: first, many manufacturers building wings use straps as multiple handles to move one’s hands back and forth to increase or decrease power. There’s just something inherently uncomfortable about climbing-strength canvas straps on bare hands. I’m not entirely sure how, but I see that changing. Other companies are using booms and, while they’re more friendly on the hands, they’re still heavy and an evolution in boom tech is on the horizon (carbon fiber anyone?). Last, the foils themselves will get cheaper. Right now they’re out of reach for the everyman surfer but it’s simple economics: as more people enjoy the sport and more product enters the market, the price will drop.

To rationalize a buy, first consider the fun (it’s endless and you don’t have to go sit in a lineup when the waves are crappy).  A carbon mountain bike starts at around $3,000 so you’re about the same with a primo foil setup. With care and despite my follies, this all-around board can last you for years. If you’re ready to invest in a new setup that’ll expand your surf game, the F-One Rocket and Phantom foil is truly a fantastic all-around setup.