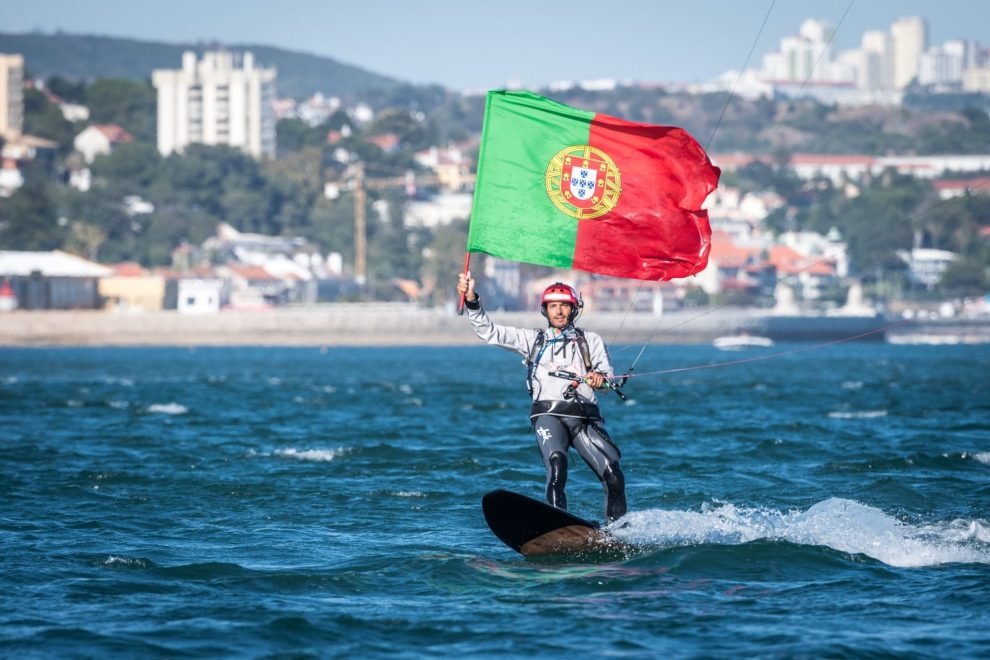 The Downwinder Guinness World Record by Francisco Lufinha was something out of this world. Imagine being in the middle of the ocean relying on just one thing, yourself, a kite and a board, with the goal of accomplishing crazy voyage. An Odyssey. Meet Francisco Lufinha, an extreme watersport enthusiast who was born by the water on August 9th, 1983, in Lisbon, Portugal. 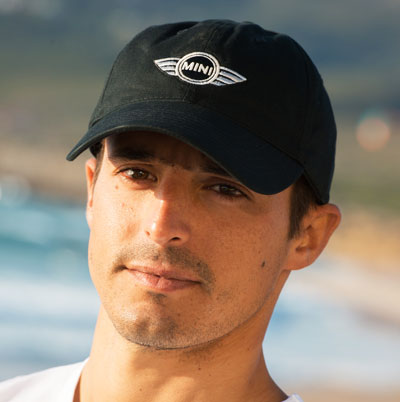 Francisco since a very young age was introduced to the water by his parents, taking him on a sailing experience just 15 days later after he was born. At age eleven, he started to compete in the dinghy class Optimist where he won several regional and national races and ended representing his country at the ’98 Europeans in Split, Croatia. Francisco was always looking on to the next extreme watersports that were being developed, Waterski, Wakeboarding, Windsurfing and most recently he started Kiteboarding in 2002.

When Francisco became an adult he followed his number one passion, kiteboarding, he started giving kiteboarding lessons in Morocco, but it got too repetitive. Out of an epiphany, he decided to change his instructor lifestyle and do something bigger, something extreme in other words a long-distance kiteboarding challenger.

His first Odyssey was in 2013. This challenge consisted of kitesurfing from the city of Porto to Lagos, Portugal, covering more than 500 km of the Portuguese coast non-stop. He said it was one of the hardest of them all since he had nobody to take an example from, and he had to take and analyze all the safety measures, what kind of support he needed, how he should train for the challenge, the diet, etc. Could you imagine how many things can go wrong while doing this type of Odyssey? You have no idea! 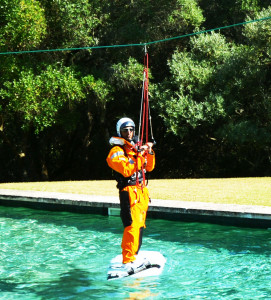 One of the toughest training he did to acomplish the first Kiteboarding Downwinder Guinnes World Record, was a 24-hour pool training, which consisted of standing on a board hanging by a cable, attached to a kite bar in a pool with all the equipment he will be using at the open sea Odyssey. This training will make him comfortable enough to see if he had what it takes to take on to this Odysey.  That’s just to show you the type of commitment Francisco put in on to doing this challenge!

After Francisco successfully accomplished his first Odyssey in 2013 he was motivated to keep doing bigger challenges each time. Francisco kept doing this type of challenges in the years 2014, 2015 and the latest in 2017. Lufinha with the company of the German Challenger, Anked Brandt set a new Guinness World record by navigating 1,646 km (888 Nautical Miles) from Ponta Delgada on the island of São Miguel to Mainland Portugal. 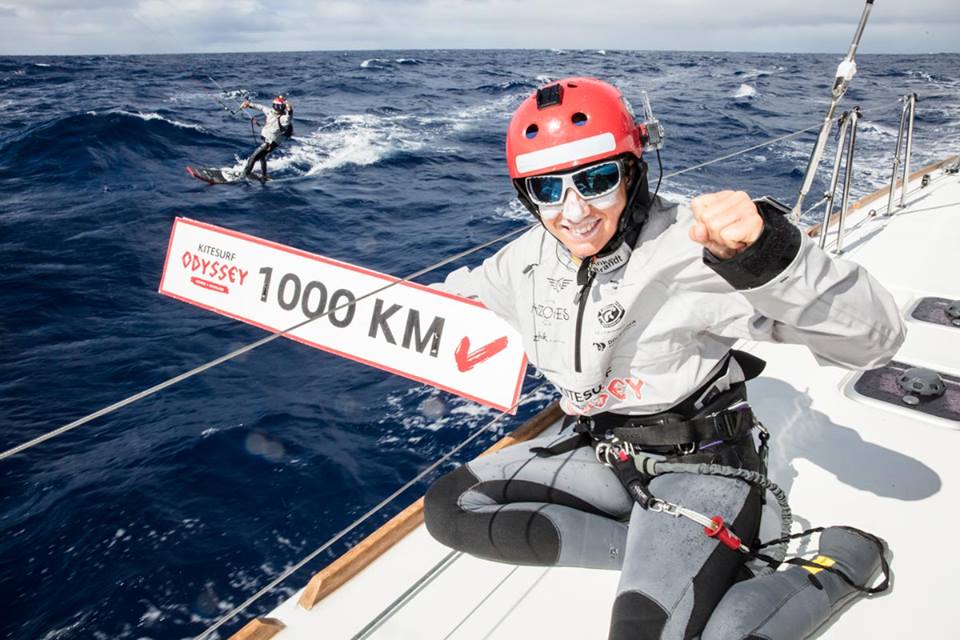 After one year of preparation to take on the most extraordinary downwinder ever done, Lufinha with the company of the German Challenger, Anked Brandt set a new Kiteboarding Downwinder Guinness World record by navigating 1,646 km (888 Nautical Miles) from Ponta Delgada on the island of São Miguel to Mainland Portugal.

This was Francisco’s latest Odysey, who has launched a full documentary about his long-distance journey, taking him 10 days to navigate on a kiteboard from the Island of  Sao Miguel to Mainland Portugal. For this type of adventure or challenge, they had to take all the safety measures, from what could ever go wrong at sea and even on simulating helicopter’s rescue. Anything can go wrong in the middle of the ocean, such as breaking the kite, losing the safety boat or losing communication.

In this documentary, you will be able to see what happened, and you would have never thought about what could that been unless you see it. I will no spoil for you the experience, so you can enjoy this amazing journey.

Francisco was one of our biggest contributor knowledge wise to do The Xtreme Downwinder Challenge,  he told us all the safety measures we should take, how to hydrate while kiteboarding and A1 tips that were really helpful on our first downwinder challenge in the Dominican Republic.

As we always say, you can do anything you put your mind and body to it, and real hours of practice & training, remember…  THE SKY IS THE LIMIT!

Scroll Down to see some questions we personally asked Francisco & the Trailer of his 2017 Odyssey.

Why did you start doing down winders and when?

I started doing these down winders in 2013, while chatting with my kitesurfing friends saying that it would be really cool to do downwinders by the Portuguese coast since the wind from the North is pretty strong. When I was giving kiteboarding lessons in Morroco and I came back to Portugal, it was time to do something more extreme.

What were your biggest fears?

Staying in the middle of the sea with no wind at night having a goal to accomplish and not being able to do it, and even worse being lost at sea, by any chance losing the support boat or the communication or get unconscious. One of the fears was also hitting a container lost from a big ship, anything could happen.

When was your first big downwinder/ how long was it?

El Porto to Lagos, that took 29 hours to cover 564 km, it was the first time that someone did a full night at the open ocean, despite being near to Mainland, you don’t see land.

How did you prepare yourself to start doing this type of downwinders?

The preparation for the Downwinder Guinnes World Record, was a bit tough because we had no example to follow, one night in a row and none stop. Thanks to Nuno, my  trainer and physiotherapist we were looking for the muscles that will be used more, like the core muscles and the legs to keep everything fit. Getting ideas from hiking, like having a backpack, ways to go to the bathroom while kitesurfing which was tough, and how to snack while kiteboarding.

How did you motivate yourself to not give up?

I want to quit lots of times, but when you look back at the preparation time that motivates you to keep going. For Every challenged I prepared myself 1 year before and for the 2017 Odyssey 2 years of preparation. Making commitments with the team and sponsors, the hard work you need to do for a long period of time, for a Downwinder Guinness World Record,  will make you change your mind when obstacles come, which motivates me to overcome those obstacles and give it all to accomplish the goal that was set years before.

If you could spread one message to the world, what would it be?

Please, we need to stop thinking of consuming, polluting and producing anything that is not sustainable. We need to be conscious of what we do on our daily tasks. The ocean is being polluted every second, and we are noticing all over the world, and plastic is one of the worst things, they come out of your clothes out of everywhere, let’s be connected and do the best that we can, to avoid plastics in our sea.