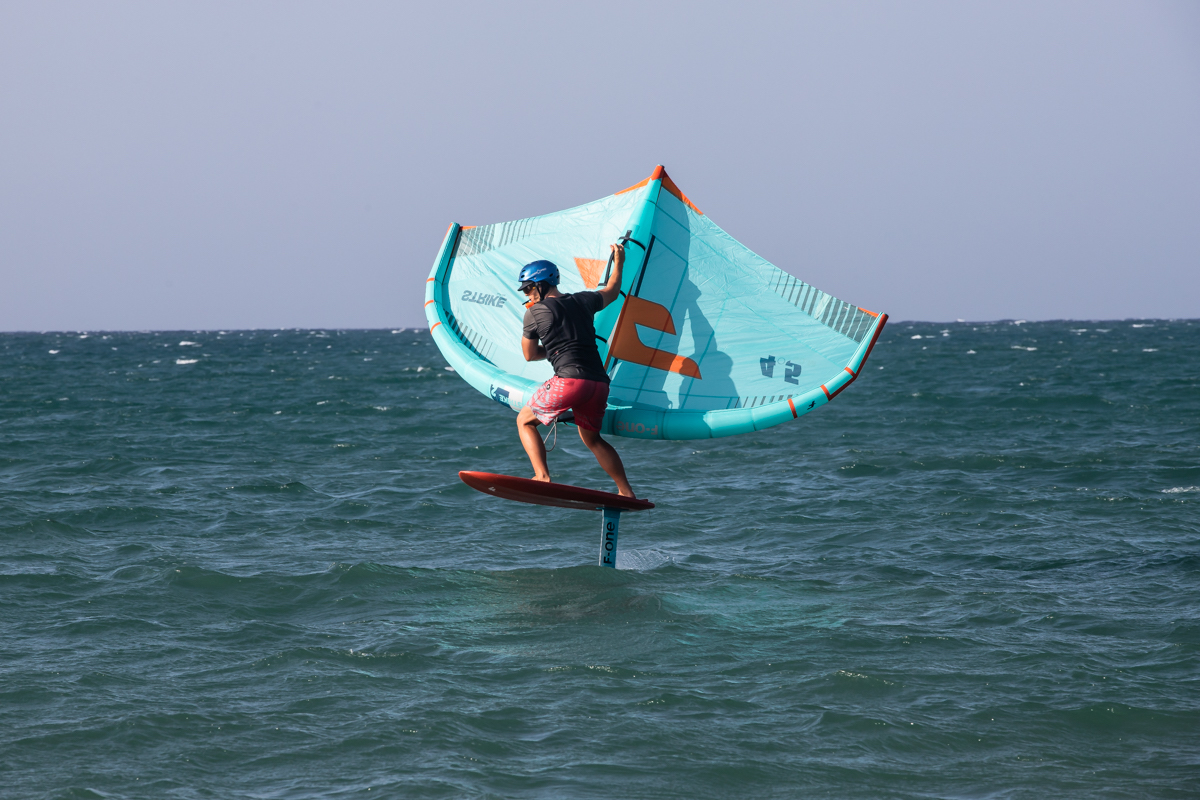 Learn how to wing foil in Cabarete, Dominican Republic.

Winging or Flying? What is this extreme sport?

The most recent and trending sport in the Caribbean, as well as other parts of the world.
A combination of kitesurfing and windsurfing that implies the use of a FOIL (A foilboard or hydrofoil board is a surfboard with a hydrofoil that extends below the board into the water. The design lets the board to leave the surface of the water) and a WING (like a kite that you hold with your hands).

Winging is such a fun sport! Less bulky and quite easy to set up, ALSO HIGHLY ADDICTIVE. You don’t need to be a windsurfer or a kiter to begin with wing foiling, though you should practice to have control on some type of board before getting started.

Where should you learn Wing Foiling? Cabarete Bay would be the ideal place to learn how to wing Foil, we at Liquid Blue Cabarete will help you make the most out of this sport and our Caribbean town.

Why Cabarete as a wing foiling destination? Everybody knows that the wind in Cabarete is at its best conditions throughout the whole year.

Also, there is a lot of room for mistakes and a wide area to learn, including Cabarete Beach, Kite Beach, and La Boca, with no shallow reef.

The teachers: Jeury and Charles will be your teachers! These guys are the best in Cabarete and sure know how to ride in the Bay.

Advice: we suggest you take at least 2 to 3 classes of the one above before you start wing foiling. As in all sports, practice is what makes a difference, especially if you are a beginner.

Wing foiling is a sport everyone would love to do, though the process can be quite tricky.

Don’t let frustration win, just have fun and be patient – results will follow.

If you already are a wing foil master this section is for you.

Getting Wing Gear in Cabarete: There are just a few stores in Cabarete that currently hold wing/foil gear. The main shops would be Kite Club, Liquid Blue Concept Store, and Vela Cabarete.

You can get in contact with us to Pre-Order any type of F-One Wing Gear that we may have available for pre-order. We have been working for over 10 years with F-One and their attention to detail in making a great product is one of the main reasons we can’t stop talking about it.

This ultimate Winging guide will show you where to go once you dominate this awesome Water Sport discipline.

Before you book your trip to Cabarete and your wing foiling classes with us read the info below – get the basics, it’s free!

Introduction to the wing: Wing foiling was a sport created by kitesurfers through the combination of the windsurfing skill and foiling, not much-kiting experience is required or probably none for you to learn.

1st: The main point to learn this sport is to have at-least some knowledge about the wind, water or board, though it is not an X factor for you to learn.

You will start by learning how to fly the wing, for some can be tricky and quite confusing, at least for me at first it didn’t make any sense though I got the hang of it on land.

It’s just like a car. You can even put it literally on NEUTRO and not move at all and just hold the wing by itself.

The wing is designed with 3 handles for you to grab that will allow you to move it around and use its different handles to generate more speed.  Maybe while reading this it won’t make any sense.

2nd: Once you learn how to dominate the wing on land your next step is jumping on a SUP (without a foil) if you haven’t foiled before.

Watch our Wing Foiling Lessons videos pt. 1 and 2 to get you started with this sport wherever you are in the world.

This will allow you to get a feel of the wing on how to maneuver it in the water to generate speed and turn back.

Then here comes the tricky part going on what you see on social media: a small foil jumping and cruising through the waves.

Reality check: If you haven’t had any board experience or foil experience this will be a tough and long transition for you to master a small foil. That’s why we then jump on a SUP foil and see how you can manage yourself while receiving more lift.

TIP: The smaller the mast the less lift you will have.

Where to get Wing Foiling Gear: Little did you know we work directly with F- One and so far from other people’s perspective F-One is making one of the highest quality gear for winging and foiling since the sport just got started. We mostly work on PRE ORDERS though we also may have some equipment at the Liquid Blue Concept Store

Funny to say be ready to workout when learning Wing Foiling, people make it look way easier than what it actually is, though be prepared.

How to choose the right wing: Choosing the right wing is just as choosing a kite. It will always depend on how strong the wind is, yes, there are different types of wings for different styles of riding.

According to the power of the wind, these are the recommended sizes for the STRIKE WING from F-ONE. If you want to learn more about this wing, check out this article!
We use F-One Wings as it is the leading brand in the market dominating the Winging world with its amazing performance.

If we say this you might not believe us but what if you see Kai Lenny Wing Surfing with an F-One Wing at JAWS.

Good to know about Cabarete Bay: Cabarete bay is one of the most common places you will see people winging and the best place to learn since you have a wider beach, lighter wind for those who are not used to the pull of the wing, and more margin of error that wouldn’t put you in any sort of danger.

Most people that go winging here just use it as a training area. Lots of riders that know the area or that come here and want to take classes with us, Liquid Blue Cabarete, usually know that we would most likely take them to other locations such as:

Encuentro beach/Outers: During late afternoons and higher tides Playa Encuentro can be a great place to do some wing foil surf + Wing foil with straps and attempt jumping with straps attached to your feet.

Jumping on a foiling is not as easy as they make it look on videos so make sure you have 100% control of the foil board before even trying to do such a thing!

Lots of people go there  to wing/kitesurf if there is some swell. Also a great spot to end a downwinder. If you want to know more about downwinders send us a message!

Paradise Island: As the name says it Paradise Island could be an interesting place to do some wing foiling. We haven’t heard of anyone doing the sport there yet, though for sure it is possible to do so. Located after Puerto Plata around 2 hours away from the main center of Cabarete.

Las Terrenas: Las Terrenas just like our Kiteboarding/Foiling Guides you can do all disciplines of foiling. Here the wind is strong enough, some places have waves reefs, and the location is just a beautiful place to do the sport.

If you know Cabarete too well and want to experience something different, we recommend you take a trip to Playa Grande and try wing foiling there, the view is breathtaking. We did it and here’s how it went.

Traveling to the Dominican Republic to Wing Foil

1:  Make sure you have more than one wing when going on a trip, wind conditions may vary and you might want to change equipment as wind keeps getting stronger. Wings dont have a de-power system which means you are always on a full throttle.

2: Wear a helmet: Unlike Kiteboarding you can detach yourself from the board quite easily and get away from the sharp foil at any second. With the wing, once you fall down most likely you will be quite close to your board. An impact vest can also be something you may consider. Don’t buy a helmet or impact vest after getting injured, be precautious.

3: Before going in the water make sure it is deep enough for you to foil/wing, you will not want to damage your foil.

4: If you’re learning practice will make it perfect, do not give up no matter how many times you fall down.

Check the following videos regarding Winging information that you may find quite valuable, especially if you have recently entered the wing foiling community or are thinking to get started.

Let’s get you started!